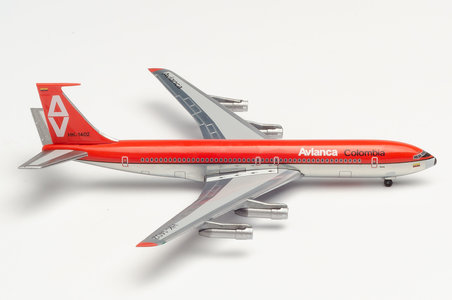 On December 5th, 1919, the world’s second-oldest airline (KLM being the first) was founded as a Colombo-German company and named Socieded Colombo-Alemana de Transportes Aéreos – or short: SCADTA. The first flight, using a Junkers F 13, transported 57 pieces of mail between Puerto Colombia and Barranquilla on the country’s north coast. Already by the mid-1920s, the route network included destinations to its neighbor Venezuela and even to the United States. The name was changed to Aerovás Nacionales de Colombia S.A. – Avianca – in 1940. To kick off the 100th anniversary, a model of the Boeing 707-320, introduced in 1969, is in development. It sports a livery variant not yet produced on a model in the 1/500 scale. Further models are currently being considered.
Scale:  1:500


In stock: no
Not available anymore