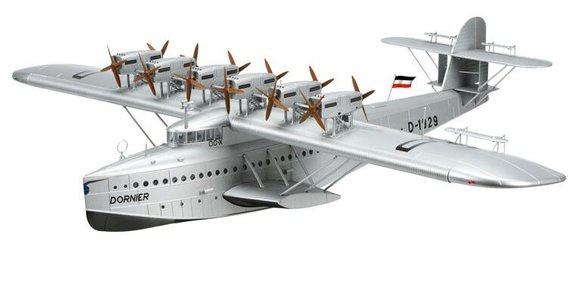 The twelve-engine Dornier Do X, with the most powerful engine ever installed in an aircraft up to that time, was designed as a transatlantic passenger aircraft. Although it was equipped with twelve radial engines, each of which had nine cylinders, its flight performance was not convincing for the intended long routes. The Do X reached its cruising speed of 175 km/h at an altitude of 1,000 meters. However, this required 14 minutes. These limitations, as well as the high number of stops required for refueling, denied this impressive aircraft commercial success. Nevertheless, Dornier had succeeded in creating a trend-setting masterpiece of aircraft design. Many later developments benefited from the experience gained with this technology carrier. After three years of service, the largest seaplane ever built ended its career in a Berlin museum, where it was destroyed in an attack during World War II.propellers and wheels are movable. The supplied display stand can be used for a perfect product presentation.
Scale:  1:72

In stock: new release, not available yet