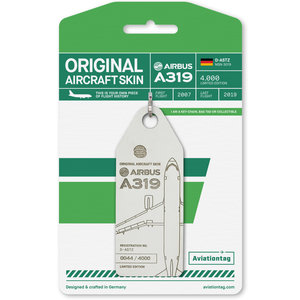 In March 2007, Airbus delivered the A319 with MSN 3019 to the Austrian airline Niki, where it was christened “Tango” and registered as OE-LEK. It was stationed in Vienna for a period of four years before Germania took ownership of the aircraft on 1 April 2011, registering it as D-ASTZ.

In February 2019, Germania had to file for bankruptcy and talks with potential investors failed, too, leaving another German carrier to meet the same fate as Air Berlin and vanish from the skies.

D-ASTZ was transferred to Wales in July and recycled there in 2020. With our Germania Edition, Aviationtag is proud to have been able to preserve a piece of German aviation history.
Scale: n.a.