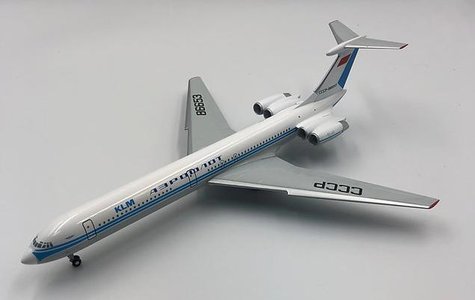 There once was an Ilyushin Il-62 with a KLM logo. This was the result of a remarkable cooperation between KLM and Aeroflot in the seventies, in the middle of the Cold War. At the time the Soviet Union kept its airspace closed to Western airlines. The cooperation with Aeroflot allowed KLM to fly passengers over the Soviet Union. To Asia this was much shorter than the alternative at the time, a stop over in Anchorage, Alaska. For obvious reasons the planes were only flown by Aeroflot pilots, but the cabin crew was partly supplied by KLM. The cooperation was not very succesful however and only lasted for a few months. But it makes KLM one of the very few western airlines that had it’s logo on a plane built in the Soviet Union.
Scale:  1:200