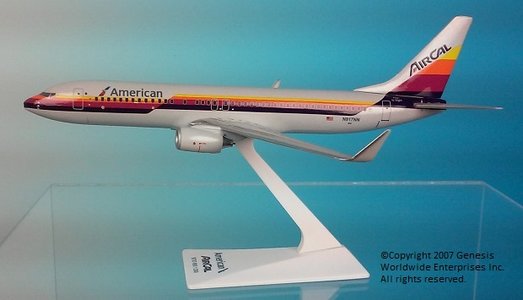 American Airlines introduced its AirCal heritage jet scheme in February 2015. This model represents this aircraft, painted in the 1981 AirCal livery on Boeing 737-823 N917NN. AirCal was acquired by AMR Corp., the parent company of American Airlines, in 1987. American continued to fly many former AirCal 737s (a new aircraft type at the time) in American's fleet from its new hub at San Jose International Airport (SJC) until American transferred the bulk of its San Jose operations to Reno Air in the mid-1990s. American continued to operate former AirCal 737-300s into Lake Tahoe (TVL) before turning over all Lake Tahoe service to their regional affiliate, American Eagle which only operated small, commuter turboprop aircraft at the time. As part of the heritage livery celebration, premium cabin passengers traveling in select markets received one of nine commemorative retro-themed amenity kits through January 2016.
Collectors who bought this also bought: