(Partly) closed from 15 till 23 February

Between 15 and 23 February we are partly closed for a short vacation. Mail parcels won't be sent and we can't answer your emails. Our colleague in the warehouse will try to send all UPS and DPD parcels, but this is not guaranteed.
Airplanes
>
Boeing
>
Boeing 737
> 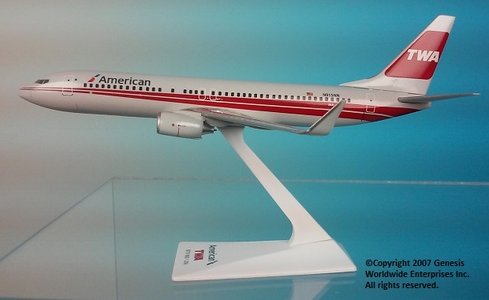 In December 2015, American Airlines rolled out the last in its series of Heritage livery aircraft that pay homage to the carriers in its merger family tree. This TWA model, bearing registration N915NN, represents this commemorative aircraft. TWA began operating in 1925 and was one of the original "Big Four" domestic airlines, flying coast to coast. After World War II, TWA began flying internationally to serve Europe, the Middle East, and Asia, and continued operating until acquired by American Airlines in 2001. Built in 1962, the TWA Terminal at JFK was designed by Eero Saarinen to usher in the Jet Age. The shapely building was designated a New York City landmark in 1994 and placed on the National Register of Historic Places in 2005. It is scheduled to be reopened to the public as a 505-room hotel in 2018. There will be an observation deck, bars and restaurants, and a museum showcasing Mid-Century Design, the story of TWA and the history of Queens as the place where the Jet Age was born.
Collectors who bought this also bought: