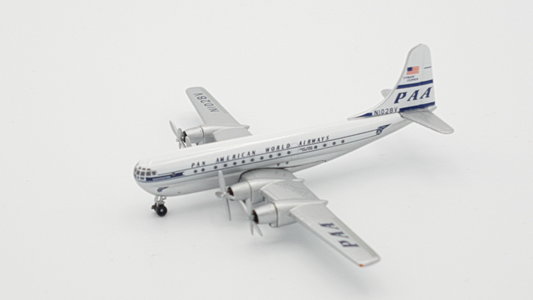 Inventor Wilhelm Hergenröther created a company back in 1949 to utilize and produce the many ideas he had patented. One of the most successful product lines turned out to be model railway accessories that he offered under the brand name Herpa (Hergenröther Patents). To commemorate the anniversary, Herpa is releasing a limited edition of a Boeing 377 Stratocruiser model. The luxurious long-range airliner was introduced into service by launch customer Pan American the same year.Pan American was launching customer of this luxurious airliner. In addition to the main deck with a capacity for maximum 100 passengers, there was a lounge in a second deck below. Clipper Flying Cloud was put into service in 1949 as the sixth of 22 Stratocruisers, being retired only in 1961.
Scale:  1:500