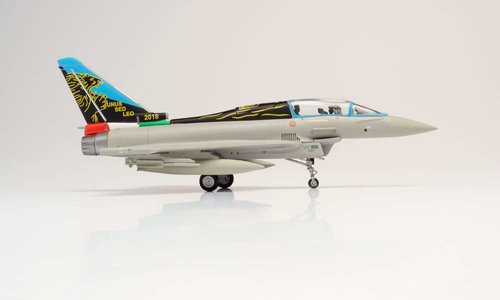 This Typhoon two-seater received an eye-catching paint scheme to celebrate the 100th anniversary of the 20th Squadron (Gruppo). 20 Gruppo is the Operational Conversion Unit for future Eurofighter pilots. Whereas the squadron’s emblem is depicted on the right side, the tradition-steeped, mouse-catching cat of the 51st Wing under which a new Eurofighter squadron is to be set up shortly, is emblazoned on the left.
Scale:  1:72