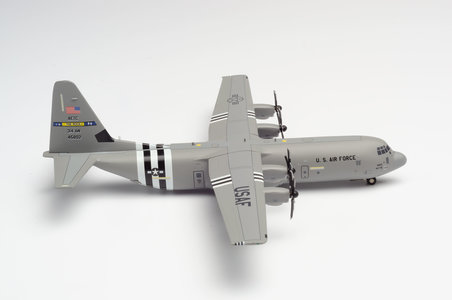 The wings of this model are often loose.

In 1944, Douglas C-47s belonging to the 62nd Troop Carrier Squadron dropped hundreds of troops as part of Operation Neptune to establish a bridgehead in Normandy. 75 years later, two Hercules transport of the same unit took part in the anniversary celebrations on and above the French coast. The C-130J with the serial 14-5802 received so-called “invasion stripes” which were applied to fuselage and wings of the majority of Allied aircraft during and after “D-Day”.
Scale:  1:200