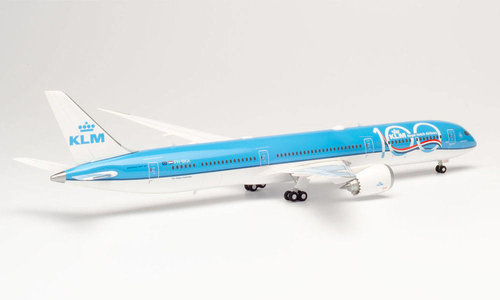 On October 7, 1919, a group of Dutch entrepreneurs founded the Royal Aviation Company, or in Dutch the Koninklijke Luchtvaart Maatschappij – KLM. The first flight took place in May 1920 with two passengers and a stack of newspapers from London to Amsterdam. From its humble beginnings, KLM today operates a fleet of over 120 aircraft flying to 145 destinations worldwide. To celebrate its 100th anniversary, and its status as the oldest airline in the world that is operating under its original name, its first Boeing 787-10 – which was delivered 100 days before the official 100th anniversary date – received a large special 100 Years-logo on its fuselage.
Scale:  1:200


In stock: 1
Last one! We won't receive this item anymore